Enjoy this year's live online presentations! Webinars are free and open to the public. Register now—space is limited!

The Lafayette Dollar shares a rich history as part of the classic commemorative series. Unfortunately, the coin is often overlooked when compared to its brethren. What is the reason for this? The time period in which the coin was minted? The design? The subject matter it commemorates? Join a light-hearted discussion on one of America’s most forgotten coins.
Instructor: Rod Gillis, ANA Education Director

The Joys of Morgan Silver Dollars

Many collectors are awestruck by Morgan silver dollars - their size, beauty, abundant affordable examples, and different ways to collect. Learn about the designer, the different mints that produced the coin, the hiatus from 1904 to 1921, and the GSA release of primarily Carson City dollars in the early 1970s.
Instructor: George Bazarko, Morgan Enthusiast and ANA Life Member

Big Challenges for a Big Dollar

Dwight D. Eisenhower was one of most bold and successful leaders in history. When a new dollar coin honoring him and the first moon landing was released in 1971 it was popular with collectors, but not without controversy. Learn the history of this iconic coin, the challenges it faced, and what to look for as a collector.

The Money in Your Pocket: Before and After the Federal Reserve Act of 1913

The Federal Reserve Act changed United States finance and currency forever. Explore the politics of central banking in the United States, and the policy arguments leading up to the Fed's founding in 1913. Contrast what currency someone might have had in their wallet before the Fed era, and how that wallet's contents would have changed after the Fed's founding.
Instructor: Dr. Loren Gatch, Professor of Political Science at the University of Central Oklahoma, Board of Governors of the Society of Paper Money Collectors

Gaius Julius Caesar and Marcus Junius Brutus. Two larger-than-life characters who left indelible marks on history. Their numismatic legacy incorporates several of the most famous ancient Roman coins, creating a bold illustration of the circumstances of their tragic collision that resulted in their deaths.
Instructor: Douglas Mudd, ANA Curator and Museum Director

National Coin Week and the ANA

The ANA was founded 130 years ago, and has celebrated National Coin Week since 1924. Discover the history of the annual event and the ANA through objects in the collection and articles from The Numismatist. Take a tour of the ANA’s online educational resources, including virtual exhibits, videos and activities.
Instructor: Andy Dickes, ANA Museum Specialist 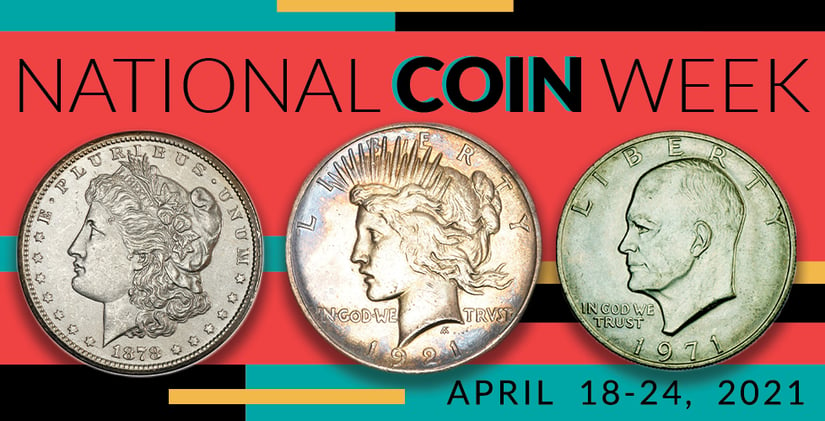 The American Numismatic Association is a nonprofit organization dedicated to educating and encouraging people to study and collect coins and related items. The Association serves the academic community, collectors and the general public with an interest in numismatics.